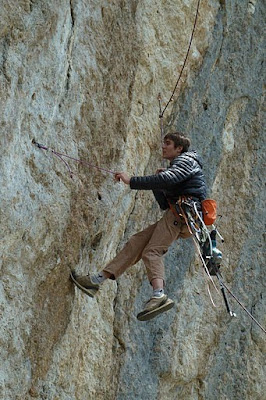 Pringle dangles from hooks and tries to pull into the wall to find the best place to put the next bolt.

First ascents are far from easy work and there are many difficulties along the way. “My biggest fear with bolting the line was that there would be a blank section where the moves just wouldn't go,” Pringle said about the difficult line, which resides meters away from the classic 5.15 Biographie in Ceuse, France. “Now that I've looked at the whole route, I know there are enough holds to make it to the top, but just barely.” 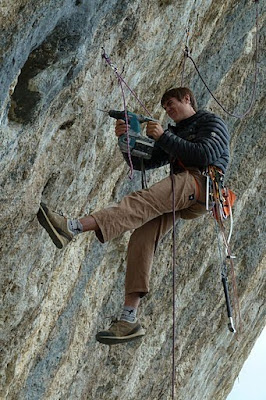 Pringle’s line begins with 40 feet of right traversing 5.13c moves into a crack, which tapers out into some hard moves on incut pockets. After the pockets, there’s a big move to a slopey sidepull followed by another big move to a shallow three finger pocket. The rest involves about 40 feet of 5.14- climbing on pockets with no real rest and another difficult boulder problem. “The hardest moves look to be at the halfway mark. It's hard to tell how hard the moves are gonna be without actually trying them but I can tell just by looking at the route where the hard sections are.” 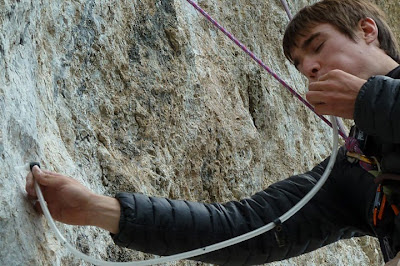 The rock dust needs to be blown out before a bolt can be placed in the hole.

Pringle described the bolting process saying, “It’s grueling work! On an almost featureless, 20-30 degree overhung wall, it's really hard to find hook placements solid enough to drill the holes from.” Drilling requires some gymnastics and a bit of fearlessness. “You hang from the hook, get into the best position you can then tense your entire body as you drill so you don't apply too much sudden pressure to the hook to make it pop off. As a result of all this sitting in your harness, swinging around, tensing and drilling, your body gets super sore and you almost always need a rest day afterward. It's also really mentally taxing because you have to think long and hard about where you want the bolts to go. You don't want to drill unnecessary holes or move bolts after you've placed them, which is sometimes unavoidable.” 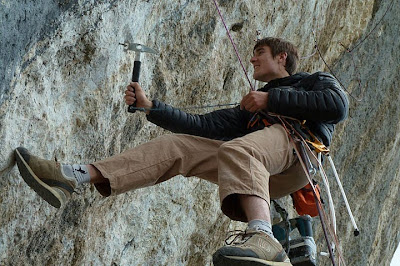 Pringle hammers in a new bolt and hanger. It's almost ready to be climbed on.

On Pringle’s second day of bolting, a Portugese couple came to the crag with their 8 year old son, who is a huge Chris Sharma fan. “As a consolation prize he got to meet me, get an autograph, and have the pleasure of watching his dad swing me into the wall to find a decent enough hook placement to drill a couple of the bolts off of.” 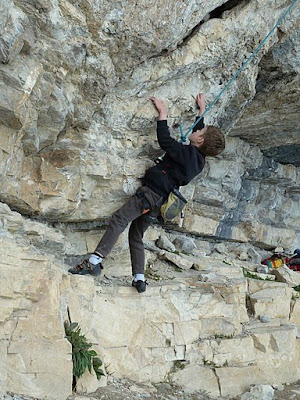 Now that the bolting is done it's time to climb. Pringle met up with some locals and they crushed.

Another Swedish couple and their son came to the base and watched Ethan while he bolted. Milton, the couple’s 7 year old son, made a plague for the climb. 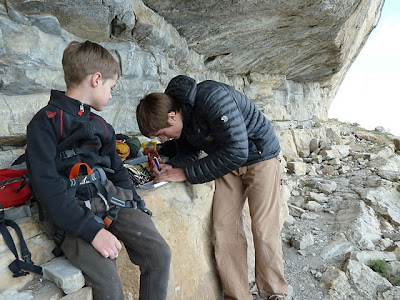 Everyone knows that once you bolt a route people want autographs. Here's Pringle being generous with his fame.

“It’s almost 2:30.” Pringle wrote. “Today is sort of rainy and cold…drops are starting to fall again. I'm trying to muster the motivation to hike up to the cliff and finish bolting. I only have one more bolt to place, then one more anchor bolt, then I'm finished. I would have finished the other day but the drill that I borrowed has a really old battery that dies after like ten holes.”

Recounting the experience, Pringle said, “This is what happens when you’re by yourself in Ceuse- bolting 5.15b, eating lots of cookies and meeting lots of new and interesting people! Not a bad thing I'm sure.”

<< Home
This is the old Touchstone Blog. This is no longer active. Please visit our new blog at http://www.touchstoneclimbing.com/blog.html